Skip to content
A History of BAM, a personal narrative

I didn’t always know I was an entrepreneur. I come from a long line of pragmatic, industrious Germans. We value hard work and high standards. My role models conscientiously fulfilled their responsibilities in companies and institutions, finding a context through which they could live out their values and maintain a relatively unambiguous vocational identity.

Growing up I was often told I should pursue engineering or maybe even architecture (I was good at math). Had there been a vocational drop-down menu, my real interest would rather have focused on the “other” option. My upbringing did little to encourage this as a possibility so I tried to find ways to pursue the other option on my own, but through respectable channels. Ultimately this led me to choose the ostensibly noble career path of missionary. As it turned out, this choice wasn’t a bad fit for someone who likes the adventure of choosing “other”.

In the early 1980’s as I began my adventures as a missionary I discovered that there were places referred to as “closed” countries. These were the no-go zones of the world for traditional missionaries. This intrigued me, not just for the challenge they presented, but because they were unexplored territory. Over the course of the next decade of enormous geopolitical change, “closed country” labels gave way to “creative access opportunities”. As a creative type, this was inspiring and drew me towards what would become the rationale for our family’s move to South Asia and the beginning of my entrepreneurial awakening.

We set out for a country that required us to be creative in our access. I had launched and operated a business in the US so it seemed that this would be a sensible approach. The city we settled in proved to be fascinating; an exciting, albeit terribly difficult place to do business. So, I did what any entrepreneur would; I tried, and tried again. As I experienced business successes and failures, I believe we served as a positive witness to the work of Jesus Christ in and around our ventures. Personally, I found a joy of creative and entrepreneurial expression that often surprised me given the challenges. Like Eric Liddell, the missionary, Olympian and subject of the classic movie “Chariots of Fire”, I had found a way to feel God’s pleasure by doing what God had wired me for.

So what does this have to do with BAM?

The term Business as Mission or BAM had not yet been coined during this time. More than a decade after I began my adventures in South Asia, I became aware of its increasingly frequent use to describe something that closely resembled my own efforts. I have to admit that I was uncomfortable with this newly emerging label. In defining and normalizing the term a debate arose about what authentic “BAM” really is. This discouraged me because others seemed to be indirectly attempting to determine whether my efforts of the last ten years were legitimate and worthy of the label.

As the BAM idea gained traction, I continued building and operating my own company. Eventually I found myself in a role of encouraging and assisting others in their own “BAM” ventures though I still wasn’t sure of my own, or their legitimacy, as bona fide BAM enterprises. We simply did our best and hoped that this new movement would eventually cast a favorable light upon us.

I feel reluctant to use the word movement for BAM. I am suspicious because of the popular marketing trend that some business gurus are encouraging as a way to go beyond simply building a brand. “Fake it until you make it,” may be a popular expression but labeling something does not necessarily make it so. I know that movements need leaders and intentionality. You have probably seen the video of the dancing guy and watched Derek Sivers TED Talk on how to start a movement. For me, a movement is something that grows organically and begins when people, events and circumstances converge to meet a shared, large-scale need. I’m not sure if the growing usage of the term BAM or its alternative forms like B4T really fit this criterion. Maybe this is in part because the debate about what authentic BAM is has not yet been resolved.

So why the pessimism?

As I write this, I wonder what I would have decided if my early vocational drop-down menu had included a “start a business” secondary option under “missionary”. This seems to be the place were BAM is found today. Way back when I made the choice to pursue a missionary calling, I was excited about the creative access option. I am grateful that it gave me the freedom to exercise my God-given entrepreneurial passion. 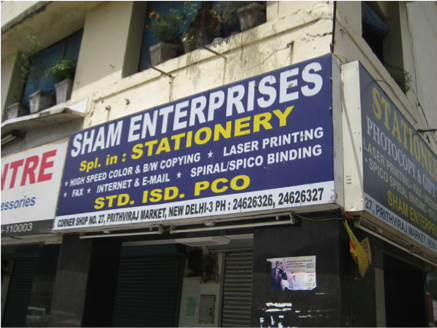 A business in India (not a bogus BAM enterprise)

Unfortunately, there was/is a downside to the creative access process. Many have discovered unique and innovative ways to be effective. Others, who lacked the skills and creativity were able to venture into places that otherwise still remained “closed” to traditional missionary approaches. Taking a “by-any-means-possible” approach, covert missionaries flooded countries that for one reason or another had recently lowered their guard to outsiders. English teachers, adult students and handicraft exporters are some of the approaches that became common cover identities for missionaries. While many have brought real value spiritually and socially, their all-too-obvious secret agendas still encouraged the suspicions of their hosts. This served to undermine the efforts of all those who dared to be genuinely creative in mission. Although much of the BAM literature tells a more optimistic version, I believe that the reaction to this history is one source of the disagreement about what authentic BAM is. Many of us who have attempted to do real business as mission desperately want to distance ourselves from examples of businesses that have been operated less scrupulously under the banner of creative access.

Like others, who in one way or another have been part of the historical BAM narrative, I continue to hope that the focus, energy and resources that have been mobilized for this thing called BAM would serve as catalyst; one that would present a missional challenge for those who truly have an entrepreneurial spirit. God gifts entrepreneurs to choose the “other” option and succeed. When these succeed He is honored and the world is blessed.

I have shared these thoughts with others over recent years and it has sparked some good conversations. I would love to hear your thoughts and experiences. Let’s debate. Let’s work together to innovate more effective ways to reflect the light of Jesus. Please comment below.

About the Author: Ralph M.

Ralph is a social entrepreneur with 25 years of experience building businesses in the developing world. From furniture manufacturing to vermiculture biotechnology, these ventures made a lasting impact on the lives they touched and their communities. Ralph loves the creative process and working with others to identify solutions and connect the dots as they seek to meet real human needs through sustainable enterprise. In recent years he has used his experience and MBA to coach and train social entrepreneurs in various countries. Ralph is passionate about helping others use the Lean Startup method to design their business models for success on multiple bottom lines.